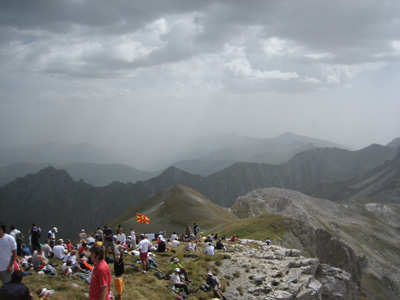 The photo above says enough:-) On the 7th of September 2008 I did climb the mount Korab, with 2754 metres above sea level the highest mountain of Macedonia,and because it is on the border also from Albania. At 13h30 I reached the top and it was amazing…. I felt really happy when I was at the top. I was with the mountain club from Kicevo (Bistra) and they helped me a lot to go up, plus a nice lady from the organization named Maria. I wanted to go to fast up, and she gave me the right rhythm to spare energy.

Going up was not that difficult, although it has to be sad that mount Korab is quit a difficult mountain to climb, that ‘s what I heard from the Macedonians…. After a rakija (the Macedonians were already drinking it in the morning, but I told them only at the top) and taking pictures on the top it was time to go back.

Going down was another story….The first 500 meters were difficult, but after a rest and a coffee it went better. We met also the ARM
(Armija Republika Makedonija=Macedonian Army) which protected us, because it is a sensitive area (on the border with Albania, Kosovo is not far either). We talked with them and we thanked them (the friends of Bistra told them: watch out their is the Dutch guy ;-))..

The last kilometer was really hard… but down Maria was waiting for me with an official certificate and I am so happy with it, it hangs on my wall now.
She told me that I was the only Dutch this year, and that I came from the country the most far away….Ne znam ( I don’t know) for the country the most far away, but for the Dutch part I am pretty sure….I brought the “Oeteldonk” flag (=a flag which is used during carnival festivities in my town ‘s-Hertogenbosch-NL) to the top and a little Dutch flag.

The little Dutch flag I lost somewhere while going down, but an unknown Macedonian told me: “Don ‘t worry, the flag will remain somewhere
on our roof (the Korab) and it stands for the friendship between our nations, it has meant to be that you lost it here on our roof”.

I was suffering a lot that day (imagine ten hours walking, going up and down), but I cannot describe my feelings, I feel so happy that I made it, with the moral help of the Bistra mountain club from Kičevo and Brane&Marija&Maria&Elizabeta. I did not feel well even that day (stomach problems), but I made it, and that is counting !

For more pictures from other people who did climb the Korab , please go to website of the organizers of the climb http://www.korab.org.mk/index.html Special thanks to Brane & Marija,Elizabeta (cousin of Brane), mountain club Bistra from Kičevo and Maria and mountain club Korab (the organization)