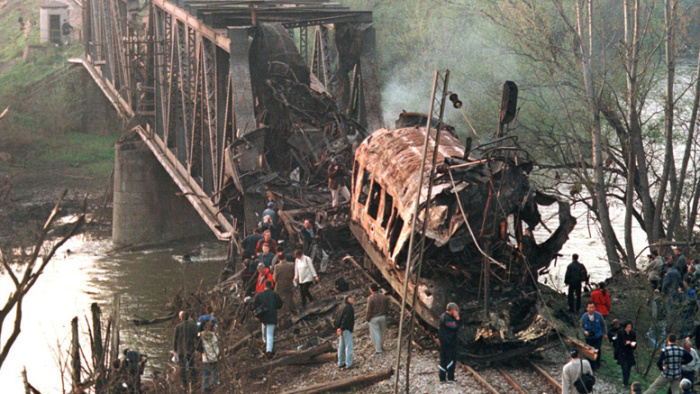 20 years since the illegal NATO bombing of Yugoslavia started

It is 20 years ago that NATO started ( on the 24th March 1999) with the illegal bombardments on Yugoslavia (Serbia and Montenegro). Illegal, because there was no UN mandate and not even a declaration of war. Allegedly Serbia was committing ethnic cleansing in Kosovo, which was not the case, actually it was the other way around: UCK, the Kosovo liberation army, (which was even considered as a terrorist organisation by the CIA) performed terrorist attacks against Serbs and Albanians on which the Serbian authorities reacted. After the bombardments the ethnic cleansing of Serbs in Kosovo continued and was nearly finished: twenty years later not a lot of Serbs do live any more in the so called “multi -ethnic” self declared state of Kosovo.

Some twisted minds at NATO called the bombing campaign “merciful angel” and this campaign was against all international laws and the Geneva conventions (link). NATO started immediately with committing war crimes as it started immediately to target also civil infrastructure, which according to international laws, is forbidden in  a war: hospitals, civil buildings, houses, roads, railways, bridges were bombed by NATO. They used also illegal cluster bombs and bombs with depleted uranium. 12 April 1999: NATO bombed a passenger train at Grdelica, 300 km south of Belgrade. Among the deaths 17 people were identified (15 civilians+2 railway workers), but until today the total number of deaths is unknown. Source: Telegraf To give you a small raw impression how it was in Belgrade, the capital of Yugoslavia, these days, you can see the small video below.

Now it is 20 years ago and nobody from NATO who gave the orders stood trial for war  crimes before an international tribunal. One of the many civilians who were killed by NATO was Milica Rakic from Batajnica: she was 3 years old when she was hit by a bomb on 17/04/1999.  She became one of the faces of NATO’s so called “collateral damage “.

Serbs could not believe that they would be bombed at the end of the 20th century, but it lasted 78 days, with besides huge human losses also huge economical losses. I have been living 5 years in Serbia and I am coming from a country which is a member of NATO and which participated in these bombardments and I was never blamed or maltreated because of it. I can only have deep respect for such forgiveness.

Let us never forget what happened and let us pay respect to the victims. Also the Ušće Tower in Belgrade (where I temporarily work) was hit by NATO air missiles.