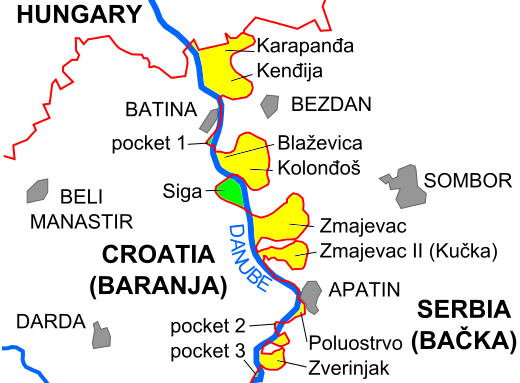 Living on the border of the European Union: Kenđija in Serbia

Last weekend I was with friends in Kenđija, located in the Northwestern part of Serbia, where Serbia meets Hungary and Croatia. When I opened my Google maps I saw the map below and was pretty surprised: according to Google I was in Croatia ! We did not passed any border post, neither we saw a sign or anything else: we were still de facto in Serbia.  The real border is currently in the middle of the Danube river. My friend who has a weekend house there told me that they pay for all utilities which are delivered from Serbia. Beside it is the (disputed) border between Serbia and Croatia, it is also the border of the European Union. Serbia is candidate member state of the EU, but until Serbia will join the EU this is an EU “outer” border. On Wikipedia you can read the following information about this still ongoing border dispute: The Croatia–Serbia border dispute refers to differing views held by Croatia and Serbia regarding their border in the area of the Danube River. While Serbia holds the opinion that the thalweg of the Danube valley and the center line of the river represents the international border between the two countries, Croatia disagrees and claims that the international border lies along the boundaries of the cadastral municipalities located along the river—departing from the course at several points along a 140-kilometre (87 mi) section. The cadastre-based boundary reflects the course of the Danube which existed in the 19th century, before meandering and hydraulic engineeringworks altered its course. The area size of the territory in dispute is reported variously, up to 140 square kilometres (54 square miles).

The dispute first arose in 1947, but was left unresolved during the existence of the Socialist Federal Republic of Yugoslavia. It became a contentious issue after the breakup of Yugoslavia. Particular prominence was given to the dispute at the time of Croatia’s accession to the European Union. As of September 2014 the dispute remains unresolved, and the line of control mostly corresponds to Serbia’s claim.

Interestingly this situation started in 1699 with the Treaty of Karlowitz, which transferred Slavonia and a portion of Syrmia (now Croatia) from the Ottoman Empire to the Habsburg Monarchy at the conclusion of the Great Turkish War. The rest of Syrmia was transferred to the Habsburg Monarchy through the Treaty of Passarowitz in 1718. And yes the Dutch diplomat Jacobus Colyer was mediating during both peace talks….

The place where we were was very nice with beautiful nature, it reminded me a lot to my old home country the Netherlands. So I spent a nice weekend with my friends on the Habsburg Monarchy shore with a view to the Ottoman empire….. Kenđija, 26/05/2018: a view towards the old Danube river, which was the former border between the Ottoman Empire and the Habsburg monarchy , currently the Croatian-Serbian border according the Croatian government. De facto this is all Serbian territory.

ps) And yes I saw a dog, but for sure that was not a lost border police dog from the Serbs or Croats 😉 .