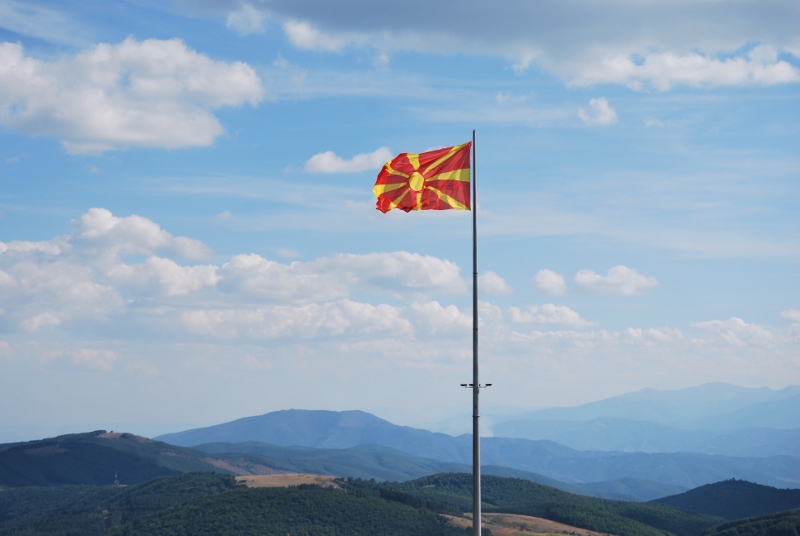 The 7th of September I went to visit Kruševo, in the center of Macedonia. It is the highest town in Macedonia, situated at an altitude of over 1250 m above sea level. I wanted to visit Kruševo already several times before, but I never managed and this time I did. Kruševo is famous from the Illinden uprising, when the Macedonians declared their  independence from the Ottomans. Their self-declared republic is known as Kruševska republika and was established here in 1903 during that Ilinden insurrection.

One of the most important points in the Ilinden uprising was the declaration of the “Manifesto of Kruševo”. It called for all the people of Macedonia regardless of their nationality and religion to fight together against the Ottoman Empire and live peacefully in a free country of Macedonia.This uprising is every year remembered in Macedonia on the 2nd of August and is called “Illinden”day.

There are two important monuments remembering this Illinden uprising which I wanted to visit:

1. The Makedonium (see below); in this monument all the bones are stored of those who were killed by the Ottomans during the Illinden uprising. 2. The Mečkin Kamen (Bear’s Rock): a monument remembering the Illinden uprising and the first independent Macedonian republic, see below. This was the place where Pitu Guli’s band (cheta) was trying to defend the town of Kruševo from the Turkish troops coming from Bitola. The whole band and their leader (voivode) perished and Kruševo as well as many of the nearby villages were set to fire by the Ottomans. Kruševo is also known as the birthplace of Toše Proeski, a famous Macedonian singer and songwriter. Toše died in a car crash in October 2007 and the Macedonian nation was in shock. Kruševo became a site of pilgrimage for the fans of Toše.

Due the geographical position of Kruševo (it is on a high altitude) you have a nice view to the Pelagonia plain. View from Kruševo, with a view to the Pelagonian plain. Huge Macedonian flag on the hill with the church of Tose

It was very nice that I finally visited Kruševo. One more thing to add: they want make of Kruševo an “ethno-town”, supported by the Ministry of Culture of the Republic of Macedonia. According to that project, Kruševo shall look like a town from the beginning of the 20th century where it was the center of the Ilinden Uprising in 1903, that lead to the creation of the first Republic on the Balkans, The Krusevo Republic. People will be dressed like Ottoman Turks and Macedonian revolutionary freedom fighters. The project aims to make Kruševo a main tourist destination in five years.

I went to the Tourist Office and wanted to ask what to visit: I got immediately a reply “I don  speak English”. Then the Macedonian who went with me translated and I wanted to know something about a monument. The lady replied, “I don  know”…. Come on people, if you want to make this a main tourist destination then please place somebody competent there who at least speaks English, because like this it will not work……