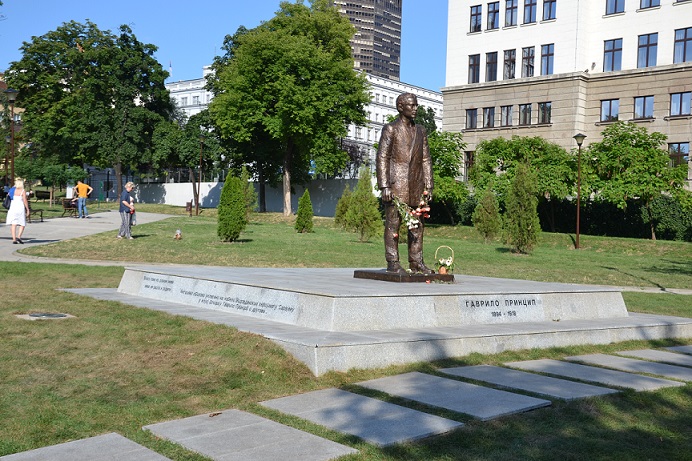 On 28th of June, Vidovdan in Serbia, a statue was unveiled for Gavrilo Princip in Belgrade, Serbia. It was a gift from Republika Srpska, which is the Serb entity in Bosnia-Herzegovina. 101 years ago he killed, on that day, the Austrian Archduke Franz Ferdinand who visited Sarajevo. Many believe that this was the first shot of the First World War. Actually it is not true, because this was just an excuse for a war on Serbia which was already planned before.

The first shots were actually fired on the 28th of July when the Austrian-Hungarian army started shelling Kalemegdan , the fortress in Belgrade, without a declaration of war. Was Gavrilo a hero, a freedom fighter or a terrorist?

That same question is asked in a recently published book, written in Dutch, with the title “Wat kwam eruit het schot?” (==What came out of the shot) from Jelica Novakovic and Sven Peeters, ISBN 9789460013461. (more information on Balkanboeken). I got it from Jelica and read it and I have to admit it is a very nice book , easy to read and written in an entertaining style.

In the preface, the authors thanks us also, as team secanje.nl for our efforts to research the story about the Serbian WWI soldiers who died in the Netherlands. Back to Gavrilo’s statue in Belgrade. I wonder why the statue was not placed on Kalemegdan, the beautiful fortress here in Belgrade. His statue is standing now in  Finansijski park, between buildings and he is standing lonely there, just as lonely as he died on the 28th of April 1918 in Theresienstadt (nowadays in the Czech Republic). Close up of the monument of Gavrilo.