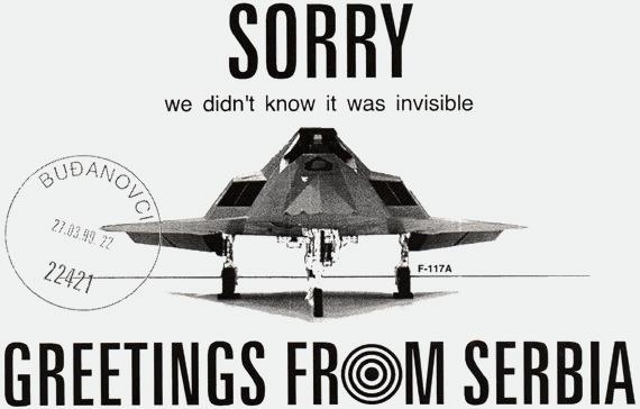 “Sorry we did not know it was invisible”

When NATO started to bomb Yugoslavia on 24/03/1999, it was the 1st war of NATO without an UN mandate. In the heart of Europe bombs were dropped and the results of these bombardments can still be seen and felt in Serbia. 18/03/2018: Monument on the hill of Straževica (in the Belgrade suburb of Rakovica) commemorating two non-commissioned officers killed by NATO aggression. This hill was the most bombarded place in Belgrade as underneath the army HQ was located.

Besides the huge economical loss of which Serbia is still suffering, there also a lot of personal tragedies which never can be calculated in money of course. During the 78 days of the military campaign, the Serbian government estimates that at least 2,500 people died and 12,500 were injured (article).

The first time I visited Serbia, in 2004, I did not feel any hostility towards me and I was positively surprised. Ten years later I decided to live in the capital of Serbia, yes Belgrade, with my Serbian wife. In those 3,5 years I never ever felt being blamed or attacked about these bombardments. I have noticed that many people don´t want to talk about it in detail, it is still considered a traumatic event for many which I of course completely understand and respect. To quote somebody: “we could not believe that we were being bombed at the end of the 20th century”.

One truly amazing story which keeps inspiring me is the story of my dear friend Zoltán Dani. He was a colonel in the 3rd battery of the 250th Missile Brigade from the army of the Federal Republic of Yugoslavia. When NATO started the bombardments he had of course to do his duty and defend his country.

In the evening of 27/03/1999 he and his team shot down a stealth F117A from the US Air force, this type of plane was thought invisible. Zoltán and his team made some modifications on their radar system, spotted the plane and shot it down. The pilot, Dale Zelko, used his ejection seat and was later rescued by US forces. That is already amazing, but what is even more amazing is that years later Zoltán came in contact with Dale by accident and they became….. friends… First Dale came to visit Zoltán in Serbia and later Zoltán went to the USA. Two documentaries were made about these visits: 21 sekund (link) about the first and “Drugi Susret” (the 2nd meeting, link) about you guess their 2nd meeting. These documentaries are very interesting to see how foes became friends (see also article here). Dale Zelko (left) from the USA and Zoltán Dani (right) from Serbia.

Zoltán told me the background and reasons why he became friends with his former enemy, because he remembers also the pain, the fears and the angers just like many other Serbs when NATO started to bomb Serbia. The author of this blog and Zoltán Dani, Belgrade, February 2017.

Everybody can shoot a plane down, but not everybody can become friends with his former enemy. Let this story give inspiration to many.If you want to see “Drugi Susret” then you can come on the special event on 27th March at 17:00 to Art Bioskop Kolarac Studentski Trg 5 (Google Maps) in Belgrade (fb event here).