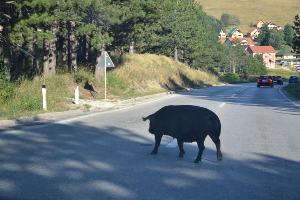 The (un)written traffic rules of Serbia

I have been driving a car for 2 months in Serbia and I have to admit I love it. I have had my driving license since 1997, but  I have not driven a car since then. To start driving a car here was such a challenge for me that I decided to take some driving lessons. My driving instructor Marko from auto škola Bjanka kept telling me all the time “samo polako” (=relax). He is right, samo polako.

So after a couple of driving lessons it was time to go on the road myself with our VW (Volkswagen) Polo from Kraljevo (KV) and to observe the “un” written  Serbian traffic rules. They do not differ a lot from the Dutch ones, but as I mostly drive in Belgrade, the capital of Serbia, it is a bit harder then let’s say the average city. In every capital city in every country it is always tougher to drive, also here in Belgrade.

Definition of a road: An open, generally public way for the passage of vehicles, people, and animals.

In Serbia nothing is “general”, but mostly a road is here also a road. More important is that you can use the road here also as a temporary parking space: if you have to go to the kiosk, the post office or you just have “to pick up something by a good friend” then this road can be used as a temporary parking space, no matter where you are. Just put your alarm lights on (or the brave ones are not even bothered by that) and you are done. It doesn’t matter that you block the road, because who cares? Watch out for the wild pigs, near Zlatibor…

Let’s continue immediately with parking space: to park your car in the city can be though, just like every other self-respectful capital. But what is different is that you can park your car for FREE on Sunday the whole day and on other days for some couple of hours. Come on that makes every (Dutch) person happy!

Every car has a “žmigavac” (=Serbian for an indicator), but here in Serbia those indicators seem optional.  Marko (yes my Serbian driver instructor) clearly always said to me in commando style: “žmigavac”. I don’t know where it went wrong after the driving lessons here, but most people tend to forget to use this žmigavac. By the way it took me more then a week to correctly pronounce this word “žmigavac”.

In contrary of the žmigavac, the klaxon is NOT an option: in contrary: if you don’t have it then you will not survive in the Belgrade traffic jungle. You can use this klaxon for every idiot who is waiting too long (and too long is here 1 millisecond) in front of the traffic light or for the same idiot who is blocking the road (see also under “the road”) and for every other circumstances you can imagine.

Licences plates in Serbia are city/region based. My colleagues here in Belgrade (their licence plates start with “BG”) warned me for cars driving with a licence plates starting with PA (Pančevo). Currently I am driving a car with a license plate starting with “KV” (=Kraljevo) and my natural enemies are from “ČA” (=Čačak). I have one colleague who drives around with SD which is Smederevo. Still have to ask which enemies they have over there. It makes life at least much easier when you know who your “enemies” are. For foreign license plates they do not care here, there are many of them (especially on the highway E75 from W-Europe towards Greece/Turkey) so why be bothered ?

Signs are mostly the same in all European countries (and even the world), but of course there are differences. In Serbia they use the Latin alphabet, but also the Cyrillic alphabet. In Belgrade mostly both, but outside Belgrade you should not be surprised to find only Cyrillic. OK, that is manageable more or less, but something it can be confusing. What sometimes is even more confusing is the lack of signs, in the picture below that was not case although… “Zig-zagging” (I don’t know if it is even an English word) is a technique which can be used on a road with more than 2 lanes for the same direction. You need a big car (like a Range Rover or something) and preferably heavy traffic. Then you push the guy’s (or lady’s) ass and then if he or she does not go to the right lane you will pass it right and immediately go left. You continue doing this until you reach your destination. They taught me that you are not allowed to pass a car from the right side, but here… OK I said enough… point taken?

Yes this country has many hills and mountains in contrast to my old home country the Netherlands. Going down is never a problem (but stopping can be), going up is more complicated: I am still failing on this point, more practise is definitely needed, but… “samo polako” 🙂

Overall I have to admit that driving in Belgrade and Serbia is not unpleasant. Yes the traffic can be busy, yes you have to watch out and have all your eyes open (but that you should do normally when you are driving) but I did until so far (hvala bože =thank God) not face very unpleasant situations: yes they are pushing sometimes, but overall they will forgive you, I have the impression. Crossing the Sava river on “Gazela’s” bridge in Belgrade.