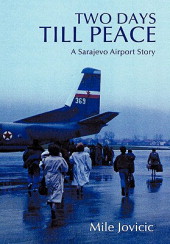 Last days I had mixed feelings: I am glad Ratko Mladić was captured last Thursday, but I was also sad:  most of the media I have seen forgot to mention the Serbian victims during the violent collapse of Yugoslavia and some people I have spoke here gave me the impression that they think that all Serbs are war criminals. For me it felt that there was no balance in it and it did not feel right for my Serbian friends. I do not want to defend Mladić, but I do defend my Serbian friends, who have nothing to do with this and were/are also victims.

For now I have something for those who think Serbs are all war criminals; sometimes you hear stories which take your breath away. One of these stories I did hear by accident: somebody contacted me my Balkan pages with a question about a map I have on my website. The question was if the map contained copyright, I checked this and the map was not copyrighted. So Mile Jovicic did included the map from my website in his book.  He wrote me that his book was about the beginning of the war in Bosnia Herzegovina and that he kept open the airport so a lot of people could flew away.

The e-mail discussion after was even more interesting, here just a  little sentence of the many e-mails we have written to each other: That month (April 1992) is crucial for understanding the war in Bosnia, because many things happened during that very month. Just to mention that in March we had a peace agreement signed, in May we had a real war. I talk about it, about people I met at the airport, and what was done to help people leave Sarajevo. As I said 30,000 people were evacuated during that month of April and thus saved from the horror of the upcoming war. Another one: Yes, they are wonderful people like all of our people from entire Yugoslavia. It was a real crime to push one so good and unique country as Yugoslavia was into war. My book tries to shed some light on how Bosnia went to war. It’s also a first hand survival story.
A Yugoslav (Serb) who helped many of his other fellow Yugoslavs (Muslims/Serbs/Croats) ? It is one of these many unwritten and unknown stories, which Mile wrote down now. So how you think about that ? Serbs are all war criminals ?

More information about the book: About Author: Mile Jovicic was born in Rogatica, in eastern Bosnia, but he has lived most of his life in Sarajevo. There he finished university and started working for a French-Yugoslav engineering company. In 1985 he became general manager of Sarajevo Airport which position he held until the beginning of the war in Bosnia. Since May 1993 he has lived in Canada. In his early school years Mile showed a talent for writing and won a national prize.

About the Book: This book is a survival story and an account of the  beginning of the war in Bosnia and its capital, Sarajevo, in 1992. It is an account of people trying to do good things as chaos was in the making. The scene is Sarajevo Airport, the most important strategic point of the upcoming war, where people rushed to flee the battles in the city. The book sheds new light on how the war began and how the doors were opened for the UN to use the airport for bringing aid to the city caught in a terrible war.

You can order the book via amazon.com Sarajevo, may 2009: the bridge were Franz Ferdinand was murdered.