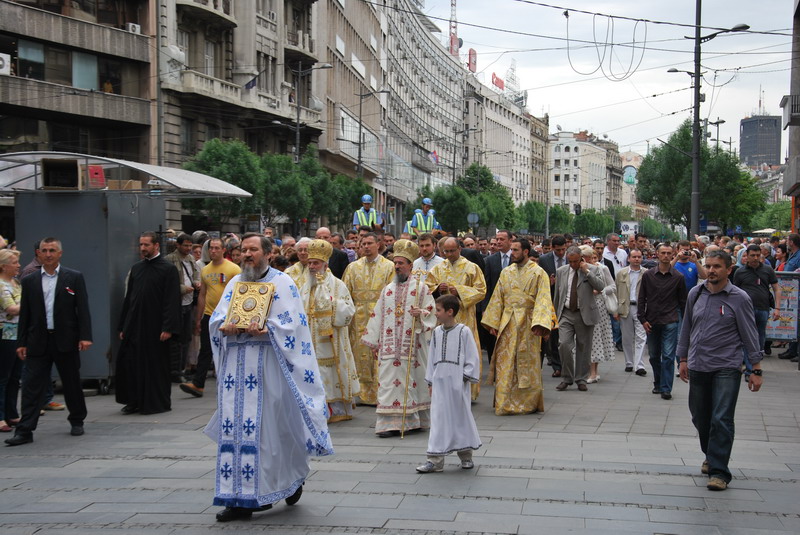 “U Srbiji je sve moguće” (1): in the middle of a procession…

Now I want to share with you some stories from my holidays in Serbia, since I was unable to write them all when I was there. I will be publish them with the title: “U Srbiji je sve moguće” (in Serbia everything is possible). Part 1 will be a short story about a procession I was viewing by coincidence.

It was 13th May 2010 around 12h00, my first day in Serbia (for this holiday), when I was walking in the main street of Belgrade, Улица кнез Михаилова (Ulica knez Mihailova). I was surprised, because it turned out that there was some procession going on. I had no idea what kind of procession it was, but for Catholics it was that day Ascension day. On the picture above which I  took  there is one famous men walking who is for most of you all unknown, but every Serb knows who I mean here: yes it is Patriarch Irinej the 45th Patriarch of the Serbian Orthodox Church, the spiritual leader of Eastern Orthodox Serbs, a position he is holding since 22nd January 2010. A little research on the internet  helped me to found out what it was about. It was the patron Saint’s day of the city of Belgrade and Ascension church (?). The patriarch was just walking a couple of meters  away from me and I was really surprised, that I did not even managed to make a good picture…Update 05.06.2010: My friend Igor commented that His Royal Highness Crown Prince Aleksandar Karadjordjevic was also in the ceremony, he is the men left the men with the umbrellas. It was very nice to see this and to experience this….Maybe I got secretly the blessings? It was only my first day in Serbia this time and I was already thinking: U Srbiji je sve moguće !!! 🙂