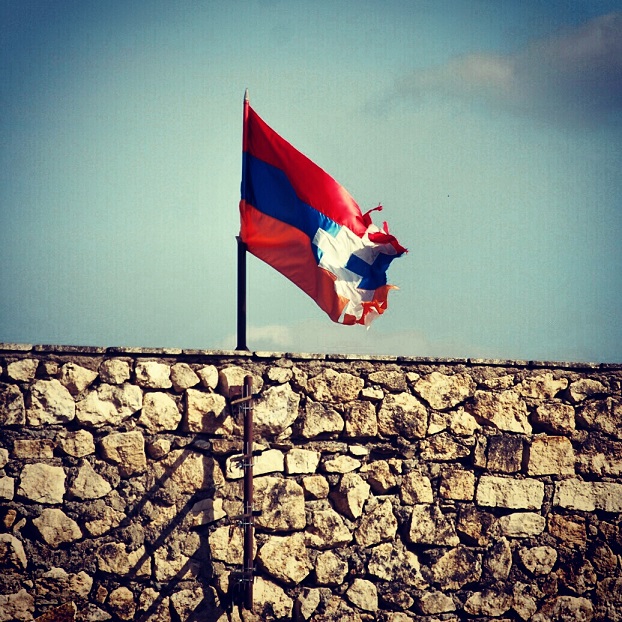 The hostilities between the Azeris and the Armenians from NKR started in 1988, a full scale war broke out in the winter of 1992 which ended in a cease fire in may 1994 which last until today.  By the end of the war in 1994, the Armenians were in full control of most of the enclave and also held and currently control approximately 9% of Azerbaijan’s territory outside the enclave. As many as 230,000 Armenians from Azerbaijan and 800,000 Azeris from Armenia and Karabakh have been displaced as a result of the conflict. Around 25.00-30.000 people died (source Wikipedia)……

So that was the place where we (les Anciens d’AEGEE) went and I have to admit, when I was there I did got the feeling of course of that war, but on the other hand, daily life continues and that is what most people did , at least that was my impression. It feels like if you are in a “twilight zone” , but on the other hand NKR is just a normal place, with very friendly and organized people: life continues, just as everywhere else….

I really liked NKR and I had very good impressions and talks with local people. The nature was also outstanding as their cultural heritage. We have visited Shushi, the Gandzasar monastery, of course the capital Stepanakert and also Tigranankert, close to the ceasefire line where saw also Agdam, a totally destroyed city…. There are so many things to write about NKR and I hope I have more time to write about it.

For now I will finish with a self written prose, below that you can click on the picture to go to my photo album about NKR.

If you travel over high mountain passes where
the earth seems to touch the sky, then
you might be able to reach a special place in our world.

The name of this place is Nagorno-Karabakh
and it has proud and hospitable people,
beside its splendid nature.

It seems there is no war, but you can feel there is neither peace.
If you look into the eyes of the Karabakh people and listen to their stories,
you know that they just want the same as you and that is to live in peace.

Click on the picture to below to see my pictures: