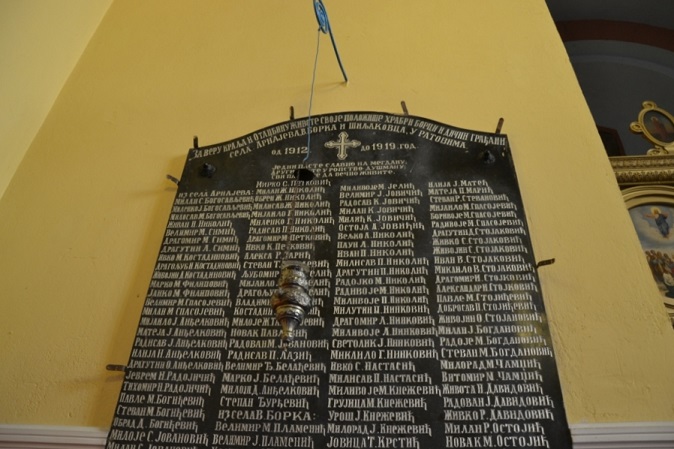 In December 2016 we published, with the help of the Dutch embassy in Belgrade, a brochure about the “Serbian Soldiers of WWI who died in the Netherlands” (link). After that our research did not stop, because we continue to search for families of those soldiers and more information. A week ago we contacted the webmaster of the website www.velikiborak.com for more help / information, because one of 91 Serbian WWI soldiers who died in the Netherlands was from Veliki Borak.

Radosav Jovičić died the 26th January 1919 in Dordrecht ( the Netherlands) and the webmaster Saša got us immediately in touch with the family of this soldier. The same afternoon we were in the car heading towards Veliki Borak to meet them. When we visited the church of the nearby village of Leskovac ( Kolubari) we found the memorial plate in the church with his name on it together with his comrades who died as well during the period 1912-1919 ( Balkan Wars & First World War). Memorial plate inside the curch of Leskovac (Kolubari), Serbia. Radosav Jovičić’ s name is on it as well.

While we were guided around the church we were informed about a mass grave with Slovak and Czech soldiers buried together with Serbian solders next to church. The names of the Serbian soldiers and from where they were are on the monument , but no trace of those Slovak & Czech soldiers. Somehow it intrigued me how those soldiers arrived here in Serbia and how found their death, just like those Serbian soldiers we are investigating who died in my home country the Netherlands. The mass grave with the remains of Serbian & Slovak& Czech WWI soldiers in Leskovac (Kolubari), Serbia (click on the picture to enlarge).

The story is nevertheless much more complicated, because Slovakia and the Czech Republic were part of the Austro-Hungarian empire. At the end of 1914 the battle of the Kolubara was fought between the Serbian and Austro-Hungarian armies in this area. Meanwhile back home in Slovakia and the Czech Republic the Austro-Hungarian empire wasn’t that popular any more and “pan-slavism” gained popularity. Without the names of those unfortunate Czech & Slovak soldiers or a death certificate, or a report about this grave it is difficult to understand what happened here and why they died. Where they killed during the battle ? Were they wounded and died ? Were they Prisoners of War who died in captivity? Did they defected to the Serbian side ? The church in Leskovac, with at the right of the church the mentioned mass grave (between the church and the tree).

We contacted the local priest who has unfortunately no records about the graves. Meanwhile I contacted several friends who have expertise in different fields regarding WWI history and I also informed of course my friend from the Slovakian embassy here in Belgrade. They gave me valuable pieces of information and they confirmed me that there are many of those kind of graves, mostly they are known, but this one did not appear on a Slovakian list we found.

Without names, official records / acts about those unfortunate Slovakian and Czech soldiers it is difficult to understand why they ended up here and why they were buried together with their Slavic brothers in the Serbian soil. Nevertheless I will continue the search so that they will not be forgotten.