I was a bridge guard for the Dutch Railways (at the railway regulator part, in Dutch called “NS-Verkeersleiding”) in Nieuwersluis and Breukelen. The bridges were in the railway line from  Amsterdam CS to Utrecht CS and in the season 1996 and 1997 I operated those railway bridges. To work as a bridge waiter is very nice: it was a well paid job for a student like I was and I had enough time to study, watching TV, to get in touch with the local population and of course to make pictures. These are now historical pictures, because both railway bridges are replaced, because of the track doubling (from 2 tracks to 4 tracks) between Amsterdam and Utrecht. All railway bridges are replaced by bridges which are higher and thus a bridge guard / waiter is not necessary any more. I spent a very nice time working here , reason why I share my story on my website. 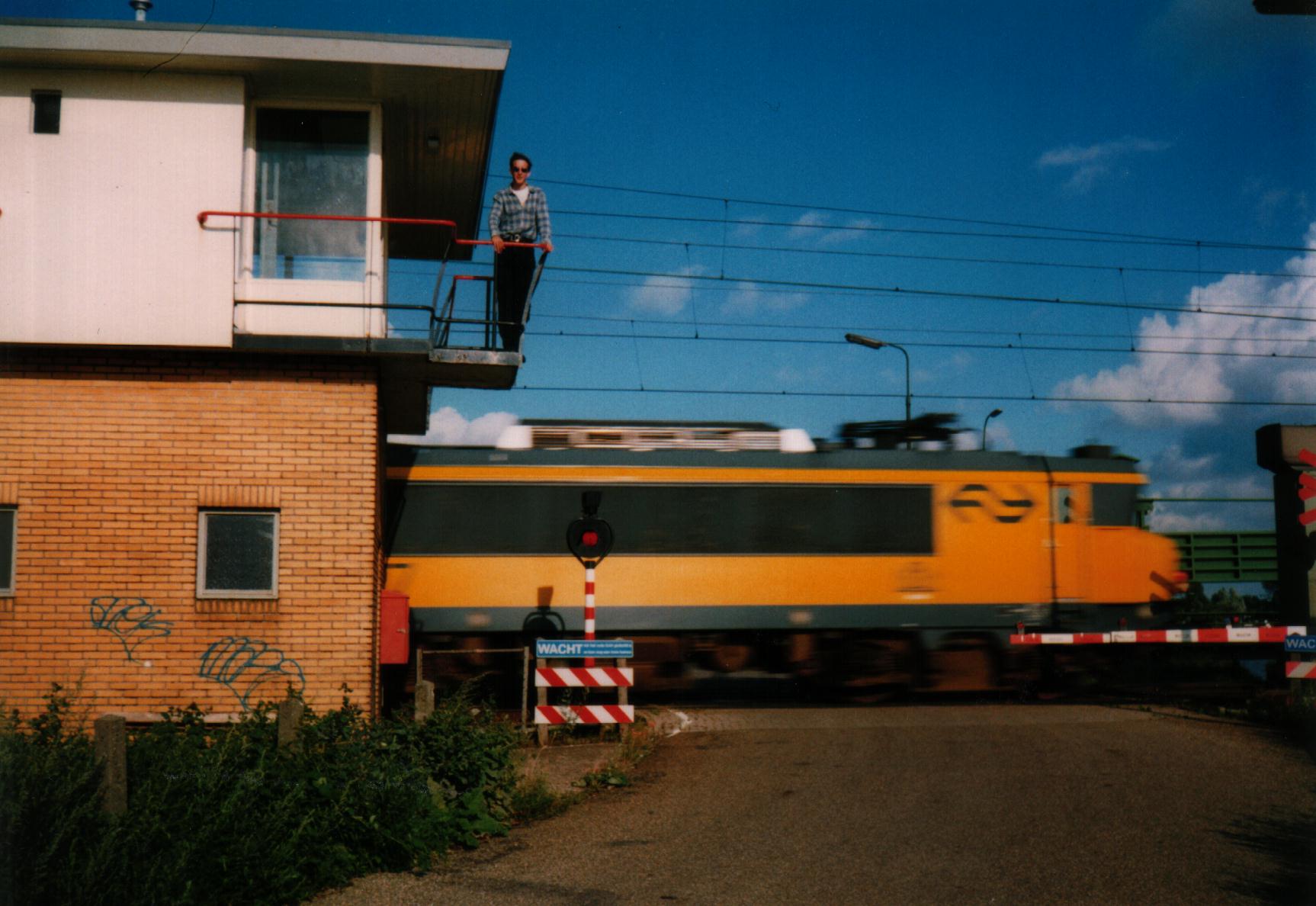 Picture above: me as bridge waiter in Nieuwersluis (Autumn 1997)

How to open a railway bridge?

We got education before we were allowed to operate the bridge. It was pretty clever to secure the bridge like this: the key for the tableau (=control panel) where you could open the bridge was attached on a closed ring which was placed with another key in a little box. This box could only be opened after the train dispatcher in Amsterdam gave permission via his computer. We had to call the train dispatcher in Amsterdam to get this permission.

When you got the permission you turned the key and all the light signals for the trains before the bridge went red. You took the key from the little box and then you putted the key in the tableau. Then it was only a matter of pressing some buttons. Two little bridge signals had to be turned before: from white to red (see signals here under), in the position “no permission to pass”, then the bridge could be opened.

Yes one time I forgot to turn the bridge signals, the train dispatcher was drinking coffee and trains had to stop. Then you are thinking “why this train stops, I did my job”….and then they are calling you from Amsterdam….

Working as a bridge keeper

I had services on the post of Breukelen or Nieuwersluis. Breukelen was close to the station, but was a bit boring, because you did not had so much space. There was also a busy railroad crossing near the post there and sometimes people almost get caught by a train, because the passed the closed barrier.

There were fixed times when we could get permission to open the bridge: around ’04 and  ’34, because then there were no trains scheduled. Imagine, the railway track Amsterdam Central Station-Utrecht Central Station is one of the busiest railway lines in the Netherlands (that is why they doubled the track from 2 tracks to 4). When you got the permission you had 6 minutes. In Nieuwersluis you had also to serve the road bridge which was lying next to the railway bridge.

In the summer season there were a lot of recreational boats going from the Loosdrechtse Plassen (=Lake)  and the Vecht via the Angstel river in Nieuwersluis to the Vinkeveense Plassen (and back of course). Breukelen was less crowded. In high season it was sometimes difficult to close the bridge, because the boats didn’t stop when you put the shipping signals on red…. Then the train dispatching got nervous and starts to call you. Note also that boats in the Netherlands have always the right to pass: boats were earlier then trains….

As summer worker, the season started from April to October. Nieuwersluis was the whole year open. Normally we had shifts for 4 hours in the evening, or an 8 hours day shift. Especially during autumn it was not so pleasant to drive on your bike 4 km to Nieuwersluis from Breukelen (the Dutch Railways provided bikes, which stood in Breukelen) in rain and wind. But which was common was to call the train dispatching in Amsterdam with an excuse that your bike did broke down, if they could arrange a stop train  stopping at Nieuwersluis, which did not had a station anymore (see below). Most of them arranged that, because they knew. When you wanted back you just took your hotline and the stop train stopped for you at Nieuwersluis: that ‘s what we call service 🙂

Thank god I have never seen an accident, because both posts where close to a railroad crossing. In Breukelen that railroad crossing was heavily used. In Nieuwersluis I took my hotline to the train dispatching once, when a car suspiciously passed the railroad crossing several times and one time in the rear gear. The train dispatching took this seriously and gave a “lastgeving” (warning) to all trains to drive slowly. I was also lucky that I could not close the bridge. Even there was a defect with the bridge, or a power failure or whatever we could manually close the bridge.  Sometimes train drivers saw me lying on the balcony with something to drink in the sun, almost sleeping, then they used their horn. Sometimes, a train driver slowly and used their horn, then I saw my father waving from the train: my father was a ticket inspector at that time, and he asked the train driver to do that to say hello to me.

For my work I had also the opportunity to visit the train dispatching post in Amsterdam, because you have to see also the other side of the line of course it was really nice to see the faces from the people where you talked with. Which was interesting is to see “your” bridge on the computer screen and to see how the deal with “you”…. 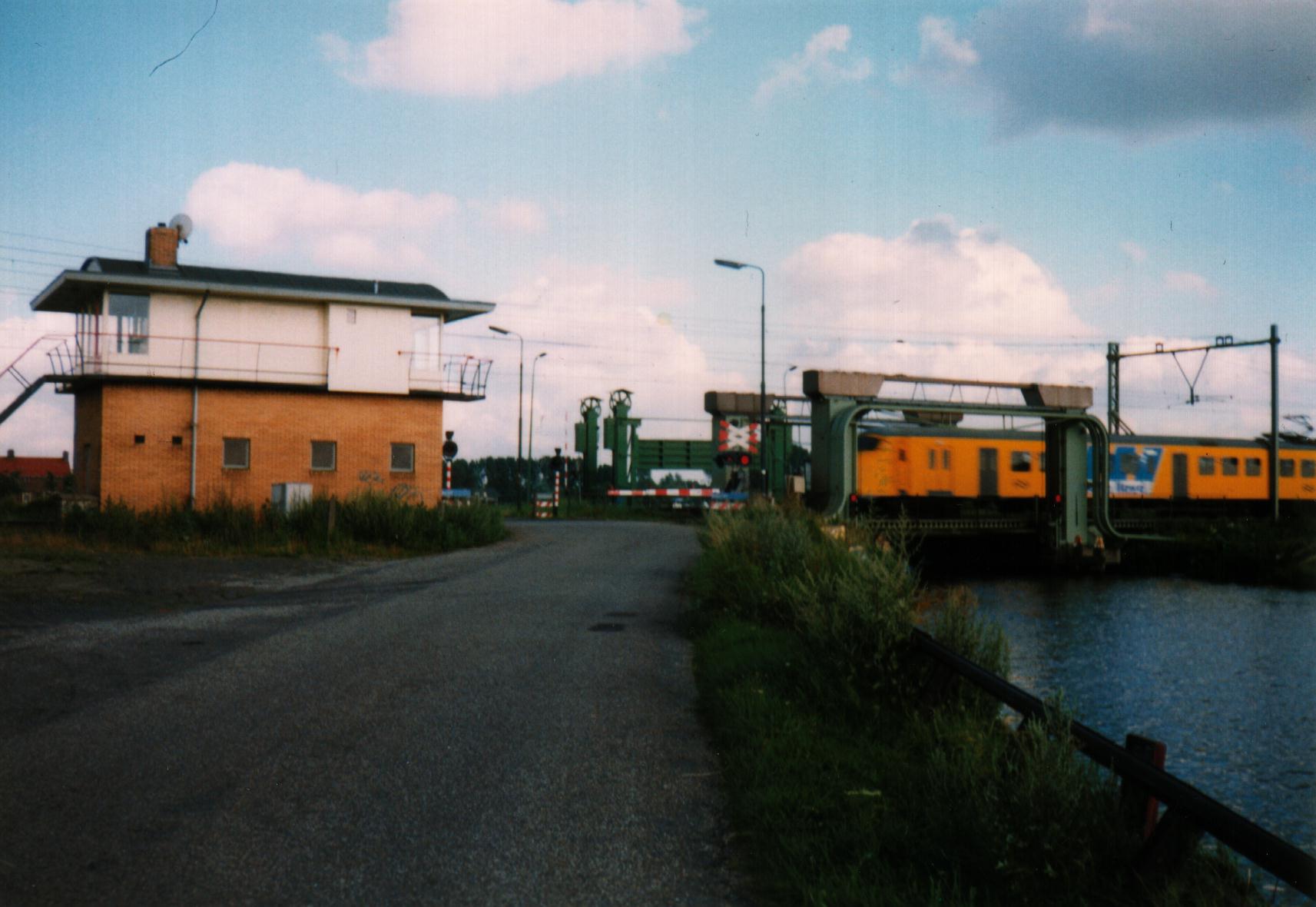 All this is away:  in 2004 the bridge was demolished. There are still some railway bridges in the provinces of Northern/ Southern-Holland, Friesland and where else I don’t know, but they are becoming rare due extensions and renewing….

I had a very nice time while I did this job: everything was possible, which is not possible any more today, it was as I was part of one big railway family when the train dispatching did arrange again a “dropping” for you… Sometimes I pass there in the train with 140 km p/h and for a moment a smile appear in remembrance of this nice period.

Below you see pictures which I took when I was flying in a cougar helicopter from the Royal Dutch Air force. By coincidence we flew over Nieuwersluis and I was really delighted. Here you see two pictures (taken from the helicopter) of the actual situation in Nieuwersluis. As you can see a lot changed. The pictures above are just memories…..