The 20th of May I hope I will arrive in Sarajevo (Bosnia-Herzegovina) and I was watching today a bit on some websites with tourist information to be prepared a bit.  Sarajevo is a city which is on the edges of the Catholic, Orthodox and Muslim world: there is no place on earth were a Catholic, Orthodox and Muslim churches are within walking distance.

During the Bosnian war of 1992-1995 Sarajevo was a besieged city, even the longest besieged city in modern history. I did read a lot about how Yugoslavia disintegrate and therefore it is interesting for me to go to Sarajevo. You can check “my Balkan pages here”. There are some remains left and I am interested in the tunnel which the people from Sarajevo used during that period, please look the link here.

Then another interesting thing: On 28 June 1914, Archduke Franz Ferdinand of Austria, heir to the Austro-Hungarian, throne, and his wife  Sophie Duchess of Hohenberg, were shot dead (while traveling in an open-topped car) in Sarajevo, capital of Bosnia and Herzegovina, by Gavrilo Princip, one of a group of six assassins coordinated by Danilo Ilić. Yes this I took from Wikipedia of course…The place where this happened you can see here on the picture (from Wiki) ,a dn I will be there next week. 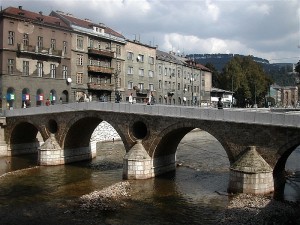 A lot of people say that this was the main cause of starting the first world war, which changed the world forever, a turning point in history.  I have no opinion about this, because I personally think there were more reasons behind, but anyway I think it is interesting to see this place and realize what happend and that 95 years ago….