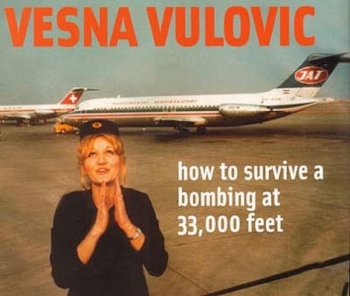 Sometimes you get attention of a story by coincidence and the story of Vesna Vulović is such a story.I was reading about a bomb attack on an airplane of JAT (Jugoslovenski aerotransport = Yugoslavian air transport). So I wanted to know more about it and searched on the internet.

It was the 26th January 1972 when a bomb exploded on JAT flight 367, which was on his way from Stockholm to Belgrade. A member of the Croatian National Resistance (Ustasha) terrorist group claimed the bomb attack a day later.

The aircraft piloted by captain Ludvig Razdrih broke into two pieces, spun out of control, crashing near the village of Srbská Kamenice in Czechoslovakia (now the Czech Republic). 27 of 28 of those on board were killed upon ground impact; but a crew member, Vesna Vulović, survived.

She holds now the world record, according to the Guinness Book of Records, for surviving the highest fall without a parachute: 10,160 meters (33,333 feet). It is an amazing story and first I could not believe it, but it is true. Later Vesna became a national hero of Yugoslavia, but when Yugoslavia disintegrated, she protested against the Milošević regime and lost her job by JAT.

If you want to read an interesting interview with Vesna Vulović then you can click here.