Today I got a nomination for being the Best Promoter of Macedonia 2010 due my continued enthusiasm on my Balkan website and this blog. I am honored by it: it is some kind of recognition for my work on my website and this blog. It encourages me to continue with this work, so I would say vote for me! You can vote via the Facebook page http://www.facebook.com/Macedonia.BestPromoterAward 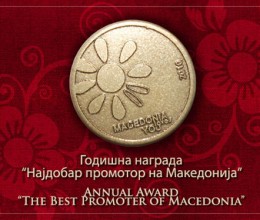 Annual Award for the Best Promoter of Macedonia is a simple idea  to honor people who have Macedonia in their hearts and they tell others to fell in love with Macedonia. The Award is introduced to recognize achievements of extraordinary People from different walks of life, all over the world, who have one common goal: promotion of various Macedonian causes. A nominee could be a person (or group of persons) who in 2010 has actively promoted the Republic Macedonia and the country causes and interests, regardless of nationality, region of activities, field and form of promotional activities e.g. cultural, social, economic, tourism, political etc. The Award is honorary . The winner receives a special medal and the title of the Best Promoter of Macedonia.

Everybody can support and lobby for  favored candidates in a special Poll posted at the following link www.facebook.com/Macedonia.BestPromoterAward, where Contest Rules are also available. The Best Promoter of Macedonia Award is initiated and organized by the Macedonia Loves You Project www.macedonialovesyou.com. The contest is open, public and organized annually. Nomination period lasts from November 15th , 2010 until  January 15th, 2011. After the first medal is awarded special Web Page will be developed, presenting the winner and all nominees. Hopefully , this will create a forum for Macedonian Promoters from all over the world. The medal is for one but winners are all!