I wrote earlier already about Jasenovac (here), but this time I wrote an article about this extermination camp in Croatia in my own mother tongue Dutch. It has been a while since there was a publication about Jasenovac in Dutch language published and I was honored that www.joods.nl published it. Joods.nl is a non-profit organisation that has set itself the goal to bring the news as it really is through objective and independent reporting on Israel and the Jewish community.

Here the article translated into English:

The Holocaust is commemorated worldwide on January 27, because that was the day that the Auschwitz extermination camp was liberated in 1945. Much has been written and published about Auschwitz, but little has been published or known about the Jasenovac extermination camp in Croatia. For example, if you search for NIOD (=the Dutch WII research institute) for “Jasenovac” you get 0 results. 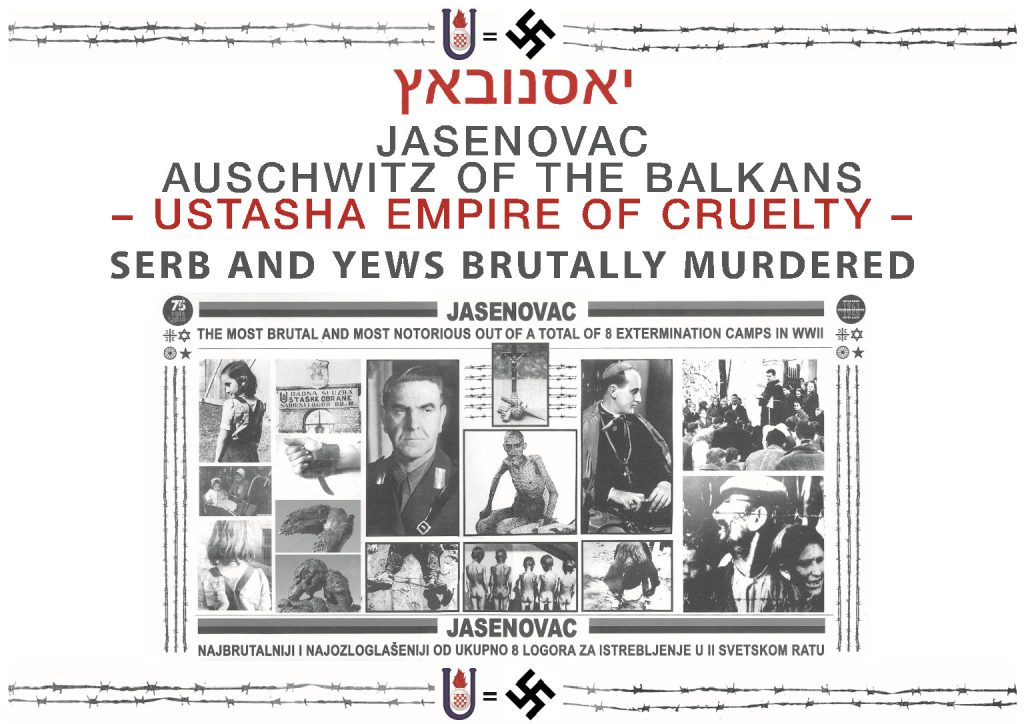 Israeli professor Gideon Greiff, expert on Auschwitz, investigated this extermination camp and published a voluminous book entitled “Jasenovac Auschwitz of the Balkans”. The Jasenovac extermination camp had an area of 240 km2, about 250 football stadiums (for comparison: Auschwitz had an area of 40 km2) and was managed by the Croatian independent state (NDH). The NDH (or the so-called “Ustasha” state) was established immediately on April 10, 1941, when Germany invaded the Kingdom of Yugoslavia, 4 days before. The camp was never liberated, but the last 1000 prisoners escaped from the camp, of whom only 100 survived, with the idea that the last one who survived would tell the story and testify about the atrocities and brutal murders that the Croatian Ustasha committed.

The NDH was affiliated with the Nazi party and its purpose was to destroy, expel or convert Jews, Roma and Serbs. Jasenovac was a particularly cruel extermination camp in that sense, because it was the most brutal and notorious extermination camp of the total of 8 extermination camps during the Second World War. For example, it had had a special camp for children, but it was also particularly cruel by the methods that were used. It was the only children’s concentration camp during WWII, the estimate is that around 20,000 Jewish, Roma and Serbian children were murdered brutally and brutally. Professor Greiff writes in his book about 57 (!) Methods of humiliation and torture until death. The murder methods were barbaric, and the murders were carried out by hand, even the German SS was shocked by the methods of the Ustasha. Heinrich Himmler, the leader of the SS, promised the ‘clean hands’ method: industrial killing without direct contact with victims (gas chambers), while Ustasha’s killing methods became incredibly cruel, manual and usually with a special type of knives, axes etc. executed. Menachem Shelah, historian of the Yad Vashem holocaust museum in Jerusalem, wrote in 1990: “the crimes committed in Jasenovac are among the most terrible crimes in the entire history of humanity.”

Historians are talking about 700,000 to 1,100,000 deaths. The Nazis themselves spoke of 600,000 to 750,000 dead. In today’s Croatia the estimation is that there are around 83,000 registered victims, so a large number of victims are not registered. These unregistered victims, the “nameless ones,” were boiled for soap, or taken from their mothers’ wombs as a foetus or thrown into the Sava River as an unnamed which were bitten, beaten or poisoned (with cyanide). The first Croatian president since the independence of Croatia in 1991, Franjo Tudjman, spoke of 3000-4000 deaths. The total number of deaths from this extermination camp remains the subject of discussion to this day, as structural attempts are being made to reduce the number of deaths and to deny the horrors of this camp.

This process was initiated immediately after WWII by Josip Broz Tito, the president of Yugoslavia. President Tito, himself a Croat, wanted to ignore “Jasenovac” as much as possible because it could undermine his “brotherhood and unity” policy. This meant that the Croats could never face their cruel Ustasha past, because they were only seen as losers of the war in Tito’s Yugoslavia. Willy Brandt knelt before the monument to the Warsaw Ghetto, but no one ever knelt before the Jasenovac monument. Unfortunately, denial of the number of deaths and the horrors of this extermination camp continues to this day.

Apart from the denial or trivialization of the crimes committed in Jasenovac, in Croatia you regularly hear the “za dom spremni” (translated: “we are ready for the fatherland”) greeting. This is the NDH greeting and is similar to the Nazi greeting “Sieg Heil”. At the memorial complex in Jasenovac, a plaque was unveiled in 2016 by Croatian politicians for the Croatian soldiers who fell in the Yugoslav wars in the 1990s. In the logo of the veterans’ organization that arranged this plaque there is written “za dom spremni”, the Ustasha salute, which is of course extremely bitter for the Jewish, Serbian and Roma victims of the cruel Ustasha regime who perished here. The Jewish and Serbian organizations of survivors have been boycotting the annual commemoration since 2016 for that reason. Another reason is that the Croatian state is still mild about the fascist past and it trivializes. The largest Ustasha meeting is in Bleiburg, Austria every year, but the Austrian government has recently banned the use of Ustasha iconography. Unlike Austria, Croatia still allows the use of fascist symbols with a blind eye. This is of course unacceptable for a country that is a member of the European Union, and that it even chairs the EU during the first half of the year 2020. The Holocaust and its horrors must never be trivialized or forgotten.

In November 2019, a conference on Jasenovac was organized in Jerusalem by the International Expert Group GH7 – stop revisionism. This GH7 group, led by Israeli Prof. Dr. Gideon Greiff, consists of scientists, journalists and researchers from the US, Germany, Italy, Israel, the Netherlands and Serbia. The participants in this conference were various academics, journalists, representatives of the Jewish community in Serbia and experts from different countries. A special mention of participation in this conference goes to some survivors of the Jasenovac extermination camp.

Smilja Tišma, Jelena Radojčić-Buhač and Gojko Rončević survived the horrors of the children’s extermination camp. They told their stories so that these crimes against Jews, Roma and Serbs are never forgotten. Together with the experts of the GH7 International Expert Group, the Jewish community in Serbia and with the help of the Serbian Ministry of Foreign Affairs, they continue to tell their story and the most important message they have is: “stop revisionism, we were there, and we have survived the horrors”.

In addition to this conference, an Israeli-Serbian center was also opened to continue to pay attention to the special ties between Serbia and Israel and the Jewish community in general. For example, Serbia was the first country in the world to recognize the Balfour declaration and therefore implicitly recognize the state of Israel and also call the country “Israel” from the beginning.

Serbia, together with the Jewish community in Serbia, will continue with its efforts to combat the revisionist tendencies and trivialization of the Holocaust. The crimes committed against the Jewish, Roma and Serbian victims of the Jasenovac extermination camp deserve special attention so that they are not forgotten. For that reason, at the conclusion of the Jasenovac conference, the “Jerusalem declaration” was adopted and signed by all participants. This Jerusalem statement calls attention to the crimes committed in Jasenovac and speaks out against revisionism and emerging neo-fascism.

Translated from Dutch, published on 17.01.2020, link to the original:
https://www.joods.nl/2020/01/jasenovac-het-vergeten-vernietigingskamp-in-de-balkan/

-Jasenovac and the Holocaust in Yugoslavia, from Barry M Lituchy, link.

-The new, updated German edition of the above mentioned book: Jasenovac und der Holocaust in Jugoslawien, von Barry M Lituchy, link. The book can be purchased for 14€90 , here is the direct link to buy the book.