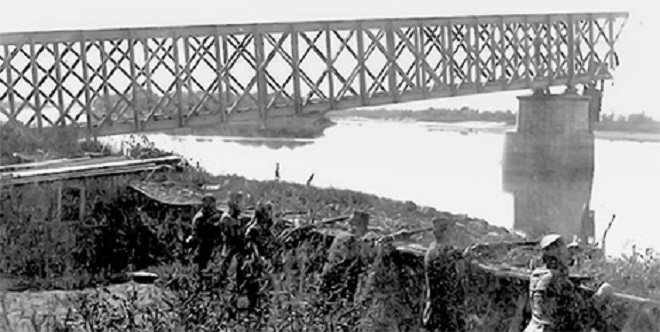 On this day, 103 years earlier, the Austro-Hungarian government send a telegram(see below)  to the Serbian government with a declaration of war. It was the start of the First World War.

Hours later the first bombs felt on Belgrade, the capital of Serbia. The First World took million lives away, it ruined cities and villages and it was the cause for many other conflicts afterwards. Belgrade itself become a city in the front line and the Serbian government already moved towards Niš, a city in the South of Serbia. The only bridge over the Sava between Serbia and Western-Europe was immediately destroyed int he night of 28/29 July 1914.

It is strange for me that I cross this border now almost everyday and that I can see it even from my office.

28/07/2017, Belgrade: View towards the Sava river, in 1914 the border between the Austro-Hungarian monarchy and the Serbian Kingdom.

And personally I never thought that I would be involved in a historical research related to the First World War. We are researching the fate of the Serbian WWI soldiers who died in my home country the Netherlands and we try to trace their relatives back. So far we are pretty successful in that, but it is far from finished. More information about that research you will find on our website www.secanje.nl Miloš Jeremić from Resnik who died in Nijmegen , more information on: https://www.secanje.nl/en/results/milos-jeremic/