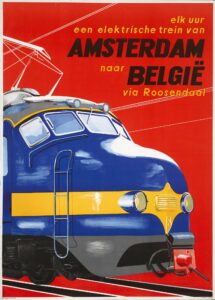 The Benelux stands for Belgium, Netherlands and Luxembourg and was the front runner of the European Union. The title of this blog might surprise you, because there were not so many ties between the Benelux and Yugoslavia,although  if one search well you will find out surprising ties. One of these ties is a type of a  train wagon from Belgium (for the train experts an ‘I4’) which was used in the Benelux train  between Amsterdam and Brussels and which ended up in Serbia.

For those who do not know, the Benelux train is an international train which since 1957 connects Amsterdam and Brussels. Several types of trains were on service on this connection.First Dutch trains (mat ’54 for the train experts under us), but they had not enough capacity at one point so the NMBS / SNCB (Belgian National Railways) and the NS (Dutch Railways) decided to use Belgian locomotives which could be used on both voltages systems: in Belgium 3000 volt and in the Netherlands 1500 volt.

These locomotives pulled I4 wagons from the NMBS and ‘plan W’ wagons from the NS and a control car from the NS. In 1986 these were replaced by a new push and pull train in red and yellow colors. When I had a student job at the Wagon-Lits in Brussels I used to work on that train. Below some pictures of the I4 carriages in service.

When these wagons were not used any more for the Benelux train between Amsterdam and Brussel the NMBS used them in international service: some were used for the Oostende (B)- Köln (D) service, others between Amsterdam (NL) and Paris (F) and some ended up even in night trains between Belgium and the South of France. In 1997 the Belgian railways (NMBS / SNCB) the wagons were put aside  and 33 wagons were sold to Yugoslavia. This is were the connection between Yugoslavia and the Benelux starts in this story.

Without even knowing it I actually entered Serbia the first time in one of these wagons:  I captured the wagon by accident  on 20/10/2004 when I stepped out of the international train Skopje-Belgrade in Niš when I came from Skopje (Macedonia), see photo below.

I tried to do more research about these wagons and to see if some were still left. I could not find a lot of information here in Serbia. Some friends told me some wagons were still in Subotica, I went to Vršac to see if there were some of these I4 wagons were left, but all these attempts were without success.  Friends showed me some pictures of some of these ‘I4’ which ended in Kosovo, the Serbian autonomous region which declared illegally independence in 2008. Until last Thursday when I was travelling with the international train Belgrade – Bar (Montenegro) and made the picture below.

I could not believe what I saw as I was earlier here, but I did not noticed it. Two days later I took the chance and visited the wagon and even entered it and made the pictures below (click to enlarge).

So after a year I finally found what  was a looking for: a ‘Benelux’ I4 wagon of which I found one in  Topčider, a part of Belgrade, the capital of Serbia. Sad to see the wagon in such state.