This is part 6 already of my unwritten stories of my latest holiday’s in Serbia, under the title “U Srbiji je sve moguće” (=in Serbia everything is possible) and it is the most complicated one. I will be honest: the first draft for this blog was written on the 24th May 2010 around 23h59. Now it is the 7th June 2010 and I want to finish this draft. It is about the most complicated and most delicate subject in Serbia, yes it is “Kosovo”. I find it a very difficult subject, because the problem with this subject is that you are soon being accused for “taking a side”. This subject is so complicated, so gray (in other words: not “black”or “white”) and full with emotions that I did not want to write about it, but I have to.

I had my lesson before in “Balkan politics” when I “took a side” in the Macedonian name issue (Greece still does not accept the name “Macedonia”, because they see it as their name and heritage) : the result was that I lost Greek “friends”and got a lot of negative reactions in different ways. This was a wise lesson, but on the other hand I also have a point of view, which I assume, can express freely.

-Back to the subject-
The 24th May I wrote (when I was in Kraljevo): Today I had some really nice conversations with my Serbian friends about everything in life. I really enjoyed it, I really hope that we can continue these discussions in future and I think I we can. The main fact is that there are not of lot of differences between “them” (=my Serbian friends and acquaintances) and me: we all share most of the European values about a democratic society and the freedom of expression, the freedom just “to be”.

Of course, when you are in Serbia, the subject Kosovo comes into the discussion if you want: you can trigger it or you can avoid it: I tried to trigger some opinions about this subject from my friends, but only because I am interested. I know I can avoid it and my friends will respect that, because for them it is more difficult to talk about it then me: I am not involved,because I am the spoiled Western citizen who is at the first sight not involved . On the other hand it was me who started about it, not them, so I cannot blame them anything, neither their opinions.

Another point is that it is difficult to be in a city (Kraljevo) where there a lot of people who are “former” refugees from Kosovo, it is difficult when a lot of people had to go there and had to fight, just the simple fact that they were  obliged by their government. I realize then again that I am from a country which never forced me to go to war and  tears fall down now that I was that lucky.

Those people around me, my friends, were not that lucky at all, they had to fight, they had to shelter for the NATO bombs or had to flew away out of Kosovo. Kosovo is not the key point, most of friends did not want to talk about it, they just want to have a normal decent live, they want to move forward.

And there it stopped in Kraljevo on the 24th May,  so we are back in today’s reality, the 7th June. When I read the text above, there is one thing which I cannot forget: it were those 3 children I gave a “lesson” about the Netherlands in a facility for refugees of all kind (old, young).  What I saw was the  “Yugoslav mix”: Macedonian mother, Bosnian father, Serbian father, Bosnian mother, Croatian father, Kosovo mother, I don’t remember and it was  for me not anymore important, but one child told me: I am from Kosovo!!!

Could I watch him straight in the eyes? Could I watch my Balkan friends straight in the eyes? Yes I could, I can and I will, because it feels like it has nothing to do anymore with me personally or with them….This has nothing to do anymore with “dirty politics”, this is about friendship.  Honestly, I do not care about the independence of Kosovo, but I did my research: I did read a lot about it, I thought about the deeper aspects, the consequences, faced the human tragedies (on every side), the injustice, the pain and the future and still:  what I should think about it? I traveled through whole Yugoslavia for last 6 years, made a lot of “new” friends everywhere, experienced beautiful things and probably I lost my heart somewhere there…

This has nothing to do anymore with Kosovo (if it is Serbian or Kosovo), this has to do with my continued feeling of injustice in this world, the injustice my friends had to face and most of them are still paying the price…

Final paragraph: I wrote about it earlier on this blog, but I will quote a little bit: the 22nd May I was standing 50-100 meters from the “Kosovo-Serbian” border with my Serbian friends, on a mountain, with a splendid view. We met a Shepard with his sheep and dog “Jacky” who cross the border without any problems so far.  My only wish is that they can continue with crossing borders without any problems in the future, as I can here now in Europe….

Will it stay “U Srbiji je sve moguće”? I hope so….because being in Serbia is crossing borders (for me), but once you have crossed it, there is no way back, because there are no more borders anymore… 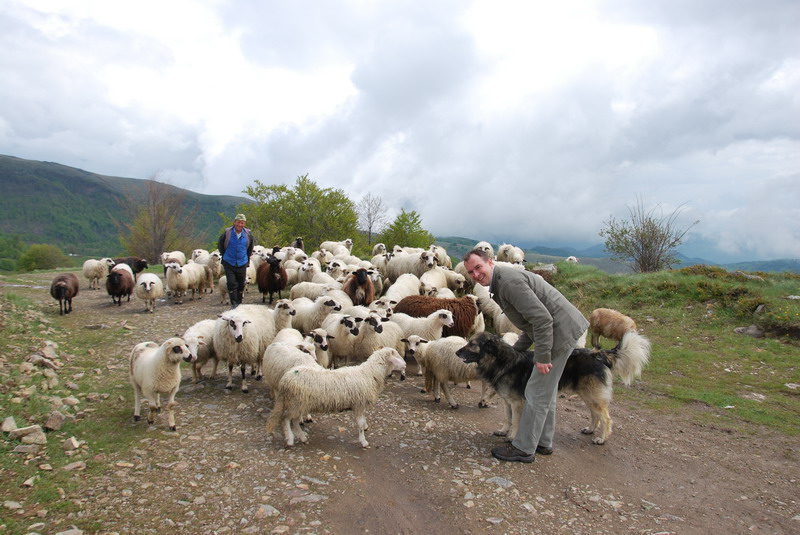